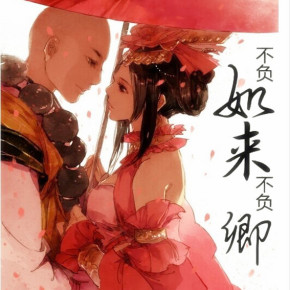 I have heard about this book for quite some time now.  I hesitated to start at first because I thought it was about history and religion.  Until I read a comment on Hamster‘s site that it was a highly recommended story.  After I finished listening to 三救姻缘 (San Jiu Yin Yuan) I like  Xiao Yu Zhao’s voice and saw that she also produced this story, hence started to listen to this audiobook.   But that was before I found out that there were two versions recorded in multiple voices.  This story is so famous that I found 6 versions on Ximalaya.  I only listed 4 versions above.  I leave  it up to you to choose which version you prefer to listen.

Snowjadeflowers did a very fantastic job in translating this book.  By the time this was posted, she has translated the book until Chapter 29.

FL (Ai Qing), an university student took part of a time travel project.  In the third attempt, she has successfully time travel to 2,000 years ago.  She met with ML (Lou Shen), a 14 years old monk.  He was travelling with his mother to Kucha from India. Based on the history, ML was a well known monk famous for translating the Buddhist scripture from Sanskrit to Chinese.  ML’s mother was a princess from Kucha.  His father is actually a monk from India but reverted after he married the ML’s mother.  When ML’s was 7 years old, ML’s mother decided to become a nun.  ML followed his mother to enter the monk hood.  ML has another brother called Ti Po.

One day after 5 months of being in the ancient world, Ti Poh found FL’s time travel watch and accidentally activated it.  When FL saw that, she has no choice but to time travel back to the modern world.

The second time she time traveled to past, she met with ML again.   10 years have passed for ML.  Both ML and his brother (Ti Po) fell in love with FL.  FL injured herself when she first arrived and her wound did not recover but turned very serious instead.  In order to save her life, FL has no choice but to time travel back to the modern world.

After 9 months, one day FL overheard a conversation between her professor with the time travel project leader.  They said they have not been successful with their time travel project with other candidates.  They wanted FL to undertake another time travel mission again.  The professor rejected because of FL’s health  has deteriorated due to the side effects of the radiation.   FL interrupted them and said that she agreed as long as she can decide the location and the timing.

The third time FL met ML was at the path where ML was facing the most challenging time of his life.  It was already 11 years passed for ML. He was imprisoned by Lu Guang (a general).  Lu Guang was commanded by the Qin Emperor to bring ML to Chang An.  Lu Guang was trying to break ML’s spirit and forced him to disrobe.  Lu Guang locked ML and his cousin sister in a room, made them naked and forced him with wine and aphrodisiac drug.  FL arrived in time and plotted with Ti Po and replaced herself with ML’s cousin.   Lu Guang forced ML to marry his cousin sister and through another plot by Ti Po, ML married FL instead.

Both ML and FL went through imprisonment, public humiliation, war and famine together.  FL encouraged ML to use his time during this 16 years of imprisonment to translate the Buddhist scripture from Sanskrit to Chinese in preparation for his upcoming time in Chang An to spread Buddhism teachings.

There was a 2 year timeline that FL can stay in the ancient time which she has been trying to ignore.  When she found out that she was pregnant and symptoms of aplastic anemia appearing, she has no choice but to return to the modern world to save her baby and herself.  FL has also made a promise that she will return to see ML in 16 years.

In that 6 six years, FL gave birth to a baby boy with leukemia.  Fortunately, her bone marrow was suitable for her son.  But all this has taken a toll on her health and she can no longer time travel.

FL’s student volunteered to take on the time travel project but at last minute, she changed her place with FL.  But this time, FL can only stay on for 6 months because of her health. ML and FL knew that this will be their last time together.

A few years later, ML met a young man that looks like him. It was his son from the future.  The young man told him that FL rejected medical treatment because of ML.  ML agreed to time travel with his son to the modern world to be with FL.